"If there was any justice in the world, this currently one-off, event-specific game would be in every bar."
— The Austin Chronicle

An Original Arcade Game
Old Lefty's Rubbin' 'n' Racin' is an independently-developed arcade game making the rounds at live events in Austin.
Central to the game's design is a colorful, minimalist interface consisting of one button for each player. The neon arcade cabinet draws players together to socialize in person. 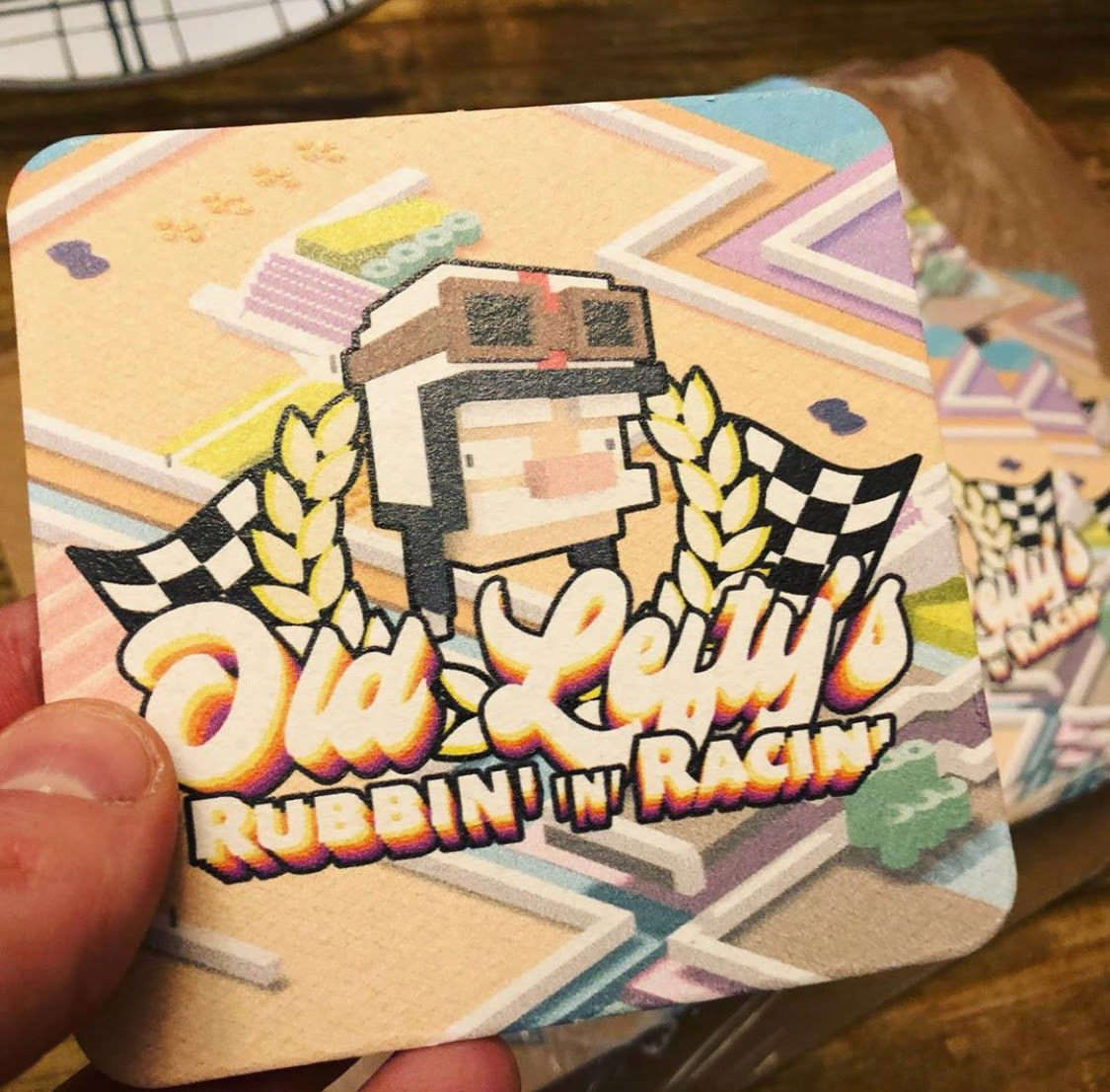 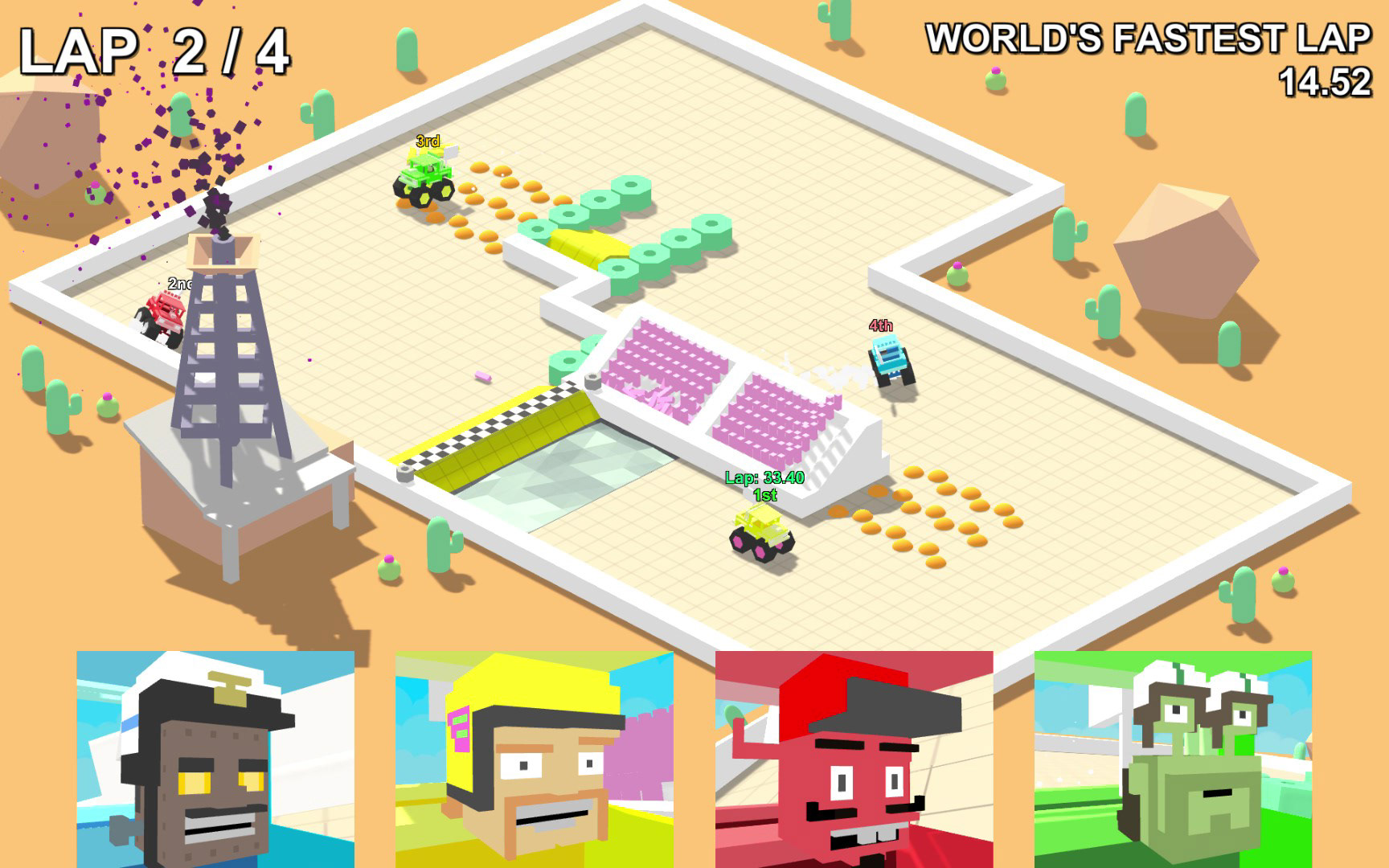 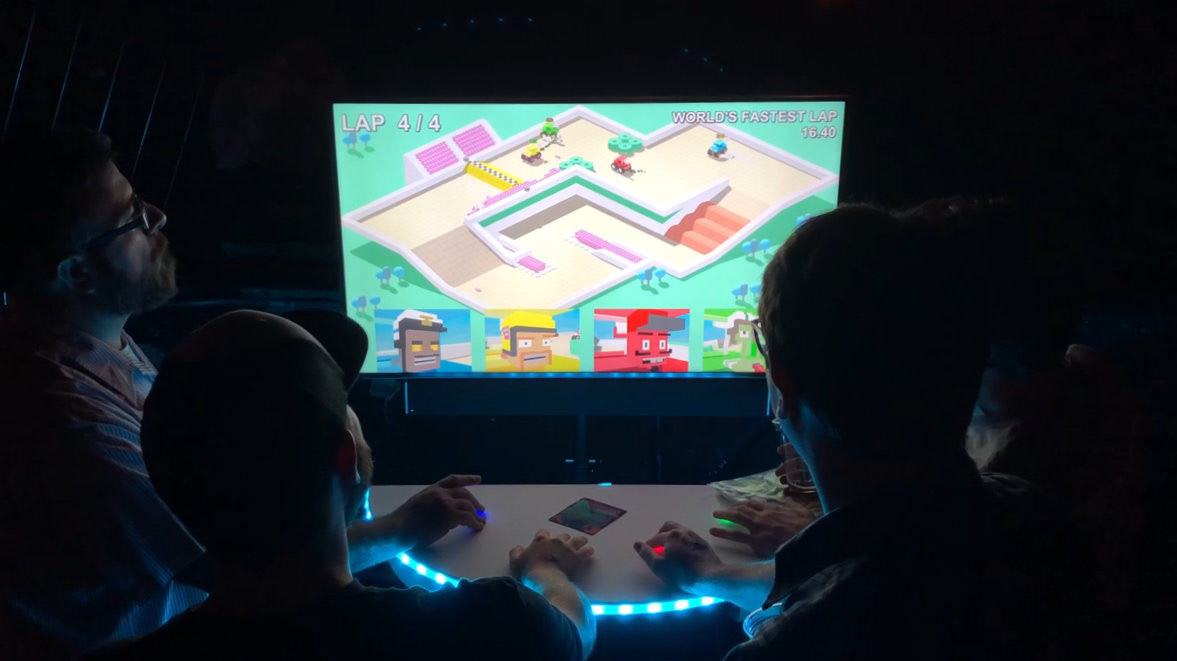 My role
I designed and developed the game from start to finish, including the creation of all game assets and the physical arcade hardware. I conducted frequent in-person playtesting and iterated its design based on real player feedback.
Tools used:
Unity — Prototyping and Development
Adobe Illustrator | Photoshop — 2D Assets
MagicaVoxel | Blender | ProBuilder — 3D Assets
Power Tools | Elbow Grease — Arcade Cabinet
Project Background
An Amalgam of Ideas
Inspiration #1: Game Worlds
In my work as an instructor at Game Worlds, we challenge teams to implement unusual features in an effort to 1) get teams to think outside the box, and 2) simulate what might happen if a manager insisted on adding a feature. One such challenge requires teams to make a one-button game. I adopted that constraint.
Inspiration #2: NASCAR
I grew up around NASCAR. Even though I never became a fan, I absorbed some racing knowledge through osmosis (ask me about restrictor plates!). A common joke about the sport is that the only thing NASCAR drivers do is turn left. This became the game's theme.

"No, he didn't slam into you. He didn't bump you. He didn't nudge you.
He rubbed you... and rubbin', son, is racin'."
(This quote led to the game's title.)
— Robert Duvall, Days of Thunder (1990)
The approach
Fail Fast
Is This Fun?
It's critical to find an answer to this question as early as possible. Since I was working with such an unusual idea, I had no way to know if it would translate into something fun to play.
Step One — Proving the Concept
My experience with Unity's physics system and its ProBuilder modeling tools allowed me to develop a quick greyboxed sketch in about an hour. I found it surprisingly fun to play.

Even in this primitive state, I felt drawn to trying to master the physics of drifting my vehicle around corners to beat my own fastest lap. I liked it — I have an affinity for mastering arcade-style games — but I wasn't sure that other players would find it as interesting.
I quickly modeled a vehicle to use while I explored the design further.

Step Two — Handcrafting the Feel
Old Lefty's is obviously, proudly, not a realistic driving simulator. This meant that Unity's built-in vehicle physics system would not work for this project — Unity's solution relies upon real-world vehicle forces like wheel torque, slip, spring dampening, etc.
I sought help from the Unity developer community to find a physics solution that matched my vision. To my surprise, none existed.
Given how important the feel of the vehicles was to the project, I spent extra time iterating on a solution from scratch. After much refining, I developed a bouncy arcade feel that relied on configurable physics joints.

Step Three — Playtesting Early
With the core interactions in place, I sought out a playtester as early as possible. My wife, a casual gamer who usually prefers games with a strong narrative, was the nearest subject.
My expectation was that she would briefly try the game and feign mild interest. Surprisingly, she was engaged for much longer than that, playing the game multiple times and pulling off mid-air tricks. Her enthusiasm for a game so far outside of her normal tastes suggested that the game might appeal to a wider audience.

Beating me at my own game.

Step Four — Pivoting by Necessity
The next logical step was to map input to a gamepad. I was surprised to discover how this changed the experience.

Having so many buttons at the player's disposal made the gameplay feel stripped-down and less fun. Instead of conveying how much fun can be had with one button, the unused inputs on the gamepad felt obvious and wasted.
To solve for this, I needed a bespoke input device. Enter the cardboard box:

I repurposed an Amazon shipping box and installed four LED arcade buttons (I deliberately matched the colors of the buttons to the on-screen vehicles). I wired the buttons to a USB encoder and wrote a script that allowed Unity to read the inputs.
This solution to the input problem was what first led me to consider making Old Lefty's a full-on arcade experience.
Next Steps
Preparing for South by Southwest
Playtest, Playtest, Playtest
​​​​​​​With SXSW fast approaching, I moved quickly to put the game in front of more playtesters.
The Second Playtest revealed an Onboarding Problem
Old Lefty's is the first arcade racing game to have a one-button interface. For this reason, a new player approaching a cabinet with four buttons could reasonably assume — based on their existing mental model — that they will use more than one button to drive their vehicle. In an early playtest, one new player approached the controller and attempted to use all of the buttons to play the game.
Despite my attempt to convey the "one-button, one-vehicle" design by matching the color of each button to the color of the corresponding vehicle, this wasn't good enough. I needed something better, so I came up with a unique solution.

The Solution: In-Car Cameras
Going back to the drawing board, I sketched out a variety of solutions to the onboarding problem. I recalled that I had developed a multi-camera setup using Unity's Cinemachine for a prior project, and I wondered if I could somehow leverage this to solve my problem.
It became one of the defining features of the game: live in-car cameras that render four distinct characters. Not only did it solve the onboarding problem, it increased the Quirkiness Quotient of the project by at least fivefold.
The Debut
Old Lefty's Debut at South by Southwest
In March, an early build of Old Lefty's was shown to the public at South by Southwest. Feedback was overwhelmingly positive despite limited content and the makeshift cardboard controller.
An encouraging takeaway was the demographic of the players — young, old, gamers, and non-gamers from all backgrounds seemed to enjoy it. Casual players had fun laughing and bumping into each other, while more experienced gamers were drawn to mastering the physics and getting faster lap times.
One person played so long his arm fell asleep.
I also received some actionable suggestions. Players wanted items to collect while racing that could affect the other players. Another idea came from a player who wanted cupholders, making it ideal for a bar. I took their feedback and implemented both for the next showing at Juegos Rancheros:

Continued Development
IndieCade Annex
In early 2020, the latest build of Old Lefty's debuted at IndieCade Annex. In addition to gameplay tweaks and additional content, I designed a stand-up cabinet for arcades that prefer a smaller physical footprint.
The Result
High Praise
By early 2020, Old Lefty's earned enough buzz that The Austin Chronicle named it the second-best Austin-made game of the year. Recognized for its clever design and addictive gameplay, this no-budget, single-developer game managed to shine alongside Austin's biggest AAA studios.